How are Women Faring in the Field of Geospatial Technology?

This week I listened to an interesting, if brief, podcast by Joe Fancica and Adena Schutzberg at Directions Magazine about women working in the field of geospatial technology.  Their podcast was inspired, in turn, by questions posed by Hilary Perkin to the Women in GIS LinkedIn group, looking for input for a session at URISA’s fall GIS-Pro 2013 conference.  The questions were:

1. What is the status of women in GIS?

Joe and Adena agreed in the podcast that it anecdotally seems that the field of geospatial technology is about 70% male and 30% female.  Commenter Philip Davis later mentioned that the 2012 National GIS Academic Program Survey estimated that women make up about 34% of academic programs in the field. I couldn’t find additional information about that survey, but those estimates jive with my personal experience in the field as well. At any rate, it seems clear that there are significantly more men than women in geospatial technology careers.

There is some reason to think that this demographic may be changing; among geospatial technology professionals in their 20s, it seems (to me and the editors at Directions Magazine, at least) that the percentage of women is somewhat higher. Adena mentioned that in her experience teaching at Penn State, the classes were about 50/50. My – perhaps earlier – experience at the University of Colorado in the late 90s was less equal. I would guess the classes were more like 70/30. I took or taught more than one geospatial-technology-related class in which I was the only woman. I’m glad to hear that more women may be entering the field now.

2. What issues do women face in our industry?

Much of the gender imbalance seems likely to 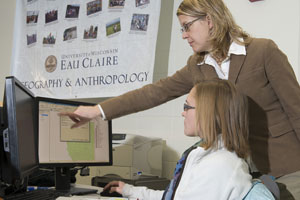 be related to the fact that the fields from which people are introduced to geospatial technology are traditionally male dominated fields: geology, geography, forestry, land-use planning, urban planning, computer science, etc.  In the podcast, Joe said that these fields, “. . . have not been brought to women as opportunity fields.” I think he means that when women (or men) don’t hear about many other women  (or men) doing a certain type of work, it can be harder for a student to visualize how they could succeed in the field, and would make them less likely to decide that it is a path that would suit them.

So, what would it mean to bring geospatial technology to women as an opportunity field? Apparently, back in the early aughts (2000 to 2002) Directions Magazine ran a series of profiles of prominent women in GIS. The series petered out, though, when they failed to see enough traffic on those articles and started to run out of women to profile. Which was probably due to the exact problem they were trying to address!

While it would be great to see more profiles of prominent women in the field, Adena mentioned in the podcast that it might be even more powerful to find local role models.  I agree. For example, universities could  bring in local professionals to talk to students, so students could hear about their career paths, network, and meet possible mentors.  This could benefit both men and women considering geospatial careers. Moreover, she made the excellent point that we can help by presenting men as willing and capable role models for women, and vice versa.  That opens the pool of potential mentors and network connections for all students.

All of the above is even more important when you consider another obstacle that Adena framed as, “Some guys are jerks.” I don’t disagree, although I believe people of all genders can be jerks. In terms of why there aren’t more women in geospatial technology, though, I think about it this way: Some behaviors that are generally accepted by a majority population can make members of a minority population feel uncomfortable or even unwelcome in the community.  Often the people perpetrating these behaviors do not recognize that their behaviors negatively affect others. They don’t recognize it, because they don’t have to; Most of the people around them come from the same perspective they do. That is called privilege.

Talking about privilege is a sticky wicket, for sure. I think a lot of that is because it is easy to conflate privilege with blame. So, if I say, for example, that I feel a little uncomfortable in a meeting where I am the only woman, I am not blaming the men in the meeting, or men in general. But I do recognize that the men in that meeting have the privilege of feeling less noticeable, less different, and more like they belong. The same is probably true for a single man in a meeting full of women. The difference is that the latter happens less often in this field, so it doesn’t work against men choosing to enter the field. Privilege doesn’t equal blame, but it does create greater responsibility for action, because, it comes with greater power.

In recognition of these dynamics, it is becoming more common to have explicit codes of conduct for professional meetings and organizations.  For example, the upcoming Foss4G NA conference in Minneapolis has published a code of conduct prohibiting things like unwelcome sexual attention, sexualized images, and offensive language related to gender, sexual orientation, race, religion, body size, etc.  I’m happy to say that Exelis VIS has a code of conduct that prohibits harassment, which is explicitly defined as unwelcome conduct, including gestures, remarks, and displaying pictures.

What other obstacles do you see that contribute to the lack of diversity in the field of geospatial technology? What additional actions could we take to address all of the obstacles?